- Making The Best of Each Day – Shane McPhee - 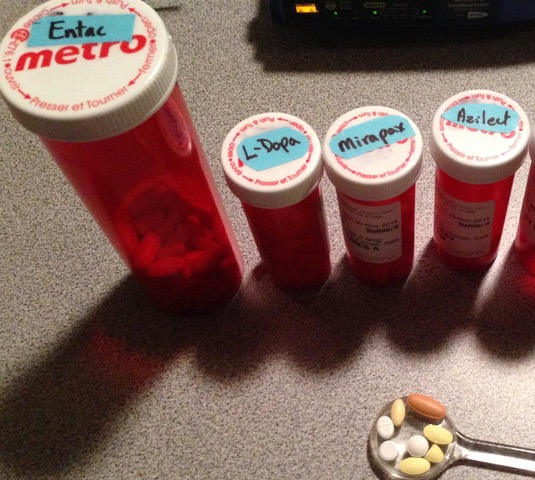 Back in October of 2011, when I was told that I had been diagnosed with Parkinson’s Disease (PD), I immediately thought that I didn’t fit that ‘bill’. Parkinson’s to me was for someone’s uncle or parent or grandparent, fast approaching life’s horizon…the stereotypical image of the ‘old guy’ with very noticeable tremors of the hands, shuffling a walk with stooped posture – I didn’t have time for that…. It was immediate denial. The news did strike me hard enough that, once I left the Docs office, I sat in my car and wept ….it didn’t take long to sink in, I guess.

At that time, I had a belief that PD symptoms were strictly related to movement – I was in for quite a surprise as time passed by. So, with ‘use it or lose it’ as my guide when facing issues related to Parkinson’s relentless intent to ‘shut me down’, I took my fitness goals more seriously and with more intensity… I wasn’t going to let it get the better of me… I started attending the gym and specifically group fitness classes at least 6 days a week, attending at least 2, one-hour classes per visit.

I soon realized that I had been experiencing symptoms that were non movement traits such as slurry speech (also fumbling for words), sleep disorders, constipation, easily overwhelmed to the point of helplessness at times, quick to cry, fatigue and more. I also gained an acceptance of my PD and saw how it’s combination of movement and non-movement symptoms would insert a continual uncertainty into my best intentions for each day… it wasn’t so easy to assume “I wasn’t going to let it get the better of me”..

Speaking of crying, I cry more now than I’ve ever cried, not because I feel sorry for myself – I’ve never said, “why me?”…not cuz of the constant pain I’ve been living in as I deal with osteoarthritis… I cry cuz my Parkinson’s Disease (PD) has brought those emotions, that sensitivity, to the surface … I’m sure there’s a medical explanation, all I know is that I can cry in an instant …. embarrassing at times!

Just recently I happened to walk into the TV room and the Mrs. was watching the tail end of one of those ‘reality’ shows…. ‘Say Yes to the Dress’. I had no interest in the ‘reality show’ world and wasn’t about to waste my time watching this. As my wife paraphrased the main character’s personal history, I felt myself being overcome by emotion and my eyes welled up with tears …yes, I cried watching the last few minutes of “Say Yes to the Dress”…. on an aside, when I shared this with family at our recent Thanksgiving (Cdn) dinner, my brother in law was quick to add that he’s one to cry at ‘Ford Employee Pricing’ ads on the TV!…yes, he’s a character.

Come to think of it, most of my Parkinson’s symptoms are just below the surface. It seems that any anomaly to my daily routine, whether it be a physical or mental stress or fatigue, my movement or non-movement symptoms, some or all, have a greater chance of becoming evident – my PD meds, taken under the correct conditions, struggle to curb symptoms that would otherwise be controlled, specifically  tremors, slowness and or rigidity of movement, slurry/rapid speech, balance and feeling overwhelmed… from my personal PD ’menu’.

It’s taken a while to reach this stage in my PD progression and treatment, with the occasional  tinkerings of my med cocktail by my neurologist/ movement disorder specialist  from visit to visit…I’ve been very pleased how we’re treating my symptoms and most fortunate that my body is able to accept the meds I’ve been prescribed.

As of late, I’m experiencing another change … I sense my Parkinson’s has taken another step in advancing…. (well, no surprise, since PD IS defined as a progressive, degenerative neurological disease). The time when my symptoms are somewhat under control due to my medication schedule (my ‘on time’) is reducing between doses. In any given day (waking hours), I’m losing an accumulative amount of about 6 hours of ‘on time’…or, an hour per dose.

I see my movement disorder doc in a couple weeks so we’ll see what we can do…. Shorten the time between doses (already at every 3 hours)? I’m currently taking 21.5 PD meds per day…may mean more pills….and the possible side effects of reaching my body’s level of tolerance.

As mentioned in an earlier ’note’, I’m continuing to ration my ‘on time’. I’m adding more variety – teaching myself a new guitar playing style (had stopped playing for 20 years), trying to play piano, attending a cooking class/course, and attempting to balance these within my day to day living. Keeping mind that I don’t want to lose what I don’t use… I’ve geared down my workouts (frequency and intensity – also because I’m attending physio sessions to treat a dislocated kneecap). I’m still writing poems, stories and life experiences with the intent of blending some of them with my music…

When I think back to that diagnosis revelation in 2011, I guess ‘I do fit the bill’, I just never read the fine print to really understand what living with Parkinson’s would lead to in my life…

When I wrote this in Feb of 2019, I mentioned that I was scheduled to see my Movement Disorder doctor in a couple weeks. Well, at that appointment, we thought of addressing my off time between doses by decreasing the time between doses to every 2.5 hours. We agreed I’d try it for a 2-week trial. I was quite enthused at trying this change, having had success every other time.

Such was not the case…. As I got further into the trial, more frequently did I slip into bouts of dyskinesia as each day went by. Towards the end of week 1, I was very dyskinetic and foolishly made the decision to pick my wife up from the hospital, where she’d been staying overnight after having gall bladder surgery…. It was mid-day and on our way home, another bout of dyskinesia made a rather disturbing appearance. I got us home safely … though she was terrified, I was later told once we settled.  I stopped the trial the next day after phoning my doc.

I found out, rather vividly, that I’m maxed out and at the threshold of tolerance for PD meds I can safely take per day.

Since my diagnosis, I’ve remained physically active in group fitness programs, plus I have been involved in the Parkinson’s Community as a volunteer fundraiser.  I’m a former Board member with a local Parkinson’s related charity.

I have found a passion in writing, specifically telling stories, writing poems and sharing accounts of my life, while living with Parkinson’s. I write and share these so that others can see what I’m going through or have experienced and how I dealt with it or learned from it – For the record, I have no medical training nor authority to offer medical advice.

I hope you will find my writing of interest, informative and when possible, a little humorous.

Do NOT follow this link or you will be banned from the site!